Welcome to Impact Factor, your weekly dose of commentary on a new medical study. I’m Dr F. Perry Wilson of the Yale School of Medicine.

Today I’m here in the deep, dark forest — or as close as I can find the deep, dark forest in suburban Connecticut — to talk about viruses and how they can jump from animals into humans. The zoonotic transmission of viruses is responsible for a host of epidemics and pandemics, including, of course, the most recent SARS-CoV-2 pandemic. But it’s happened before, and it will happen again.

What I love about the paper I want to talk to you about today is that the authors highlight four things that a virus that exists in an animal reservoir needs to be able to do to jump into humans. Because once we know what these four things are, we can identify viruses that are close to meeting these criteria and keep an eye out for them.

The object lesson that the researchers are using to teach us about zoonotic transmission is arteriviruses. 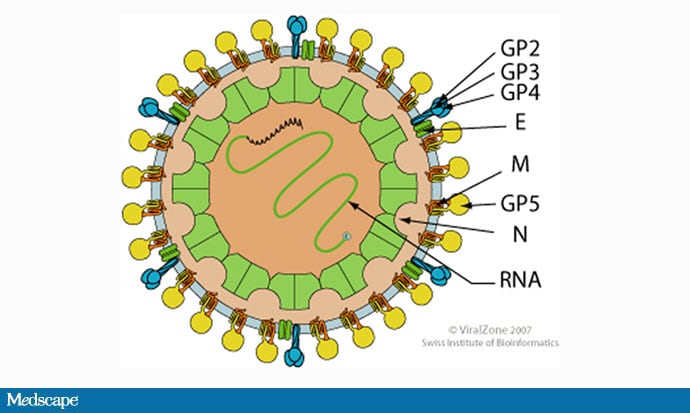 This is a family of RNA viruses, which is not too distantly related to the coronaviruses that we know and love. Specifically, they’re focusing on something called simian hemorrhagic fever virus (SHFV). This is a hemorrhagic fever virus like Ebola, for example, which, of course, has made the transition from animals into human hosts. But SHFV has not left its primary species, which is an Old World monkey, to jump into humans yet. 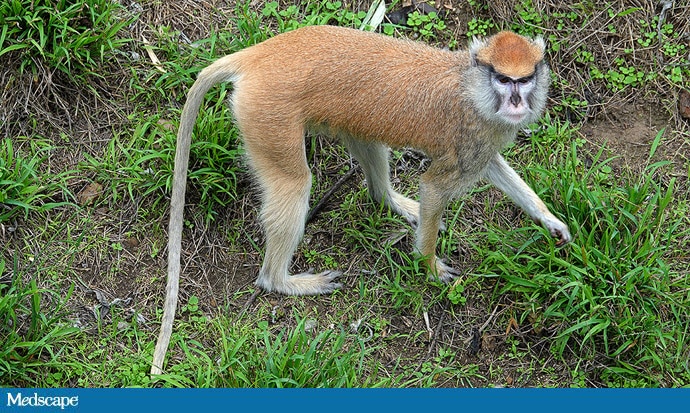 So, what does a virus that lives in some other animal need to be able to do to get into humans? And how close is SHFV, and by extension, many of the arteriviruses?

To be able to infect a cell, a virus has to get in. The SHFV, as the authors show through some nice experiments, uses a cellular receptor called CD163, which is an important cellular receptor. We need it. It helps scavenge heme groups as red blood cells break down. It’s on macrophages and monocytes, for example. The virus attaches to a very similar receptor on the monkey host, and the researchers show that it has basically no problem whatsoever attaching to human CD163 and thereby infecting cells. No barrier there. 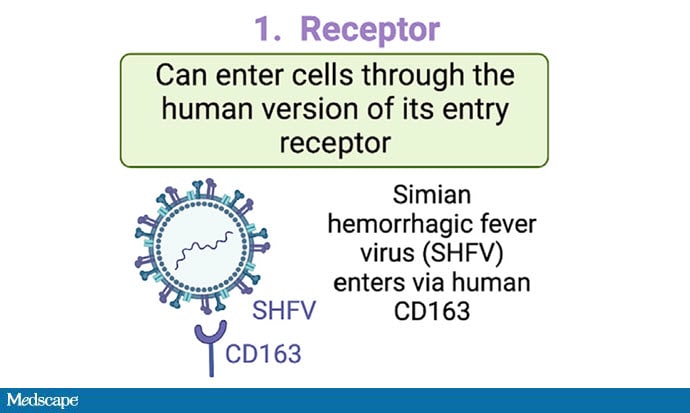 What’s really interesting about this is that they looked at a variety of Old World monkeys, and actually many of them have evolved their CD163 receptors to be less susceptible to infection. 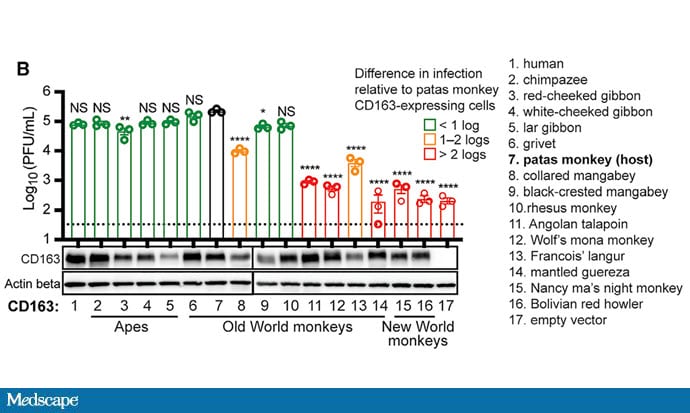 But humans, because we haven’t been under selective pressure from this virus, have really no evolutionary defense built into our CD163. It’s fully capable of binding this virus, which is concerning.

Number two, once a virus gets into a cell, that’s not enough. It must use the cellular machinery to make more copies of itself.

Can arteriviruses use human cellular production methods to make more copies of themselves? The researchers investigated this. And as you can see here, it’s no problem whatsoever.

What Exactly Is the Difference Between Mayonnaise and Miracle Whip?

These viruses can do just fine replicating inside human cells. 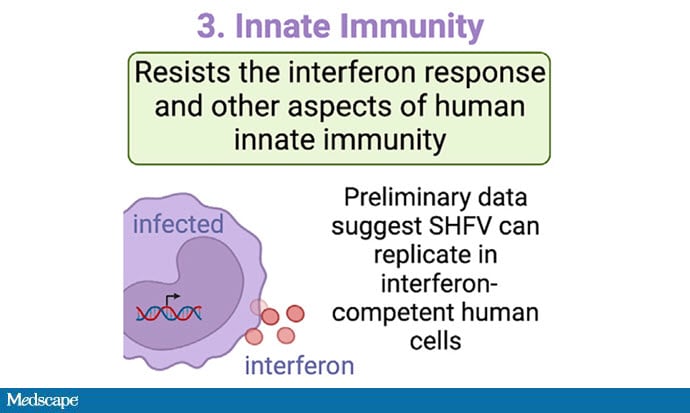 This is basically, in the case of viruses, interferon. These are substances that we produce to defend against a broad variety of viruses. They’re innate to us. We don’t have to have seen the virus before. And unfortunately, interferon does not seem to be a particular barrier to replication of SHFV. 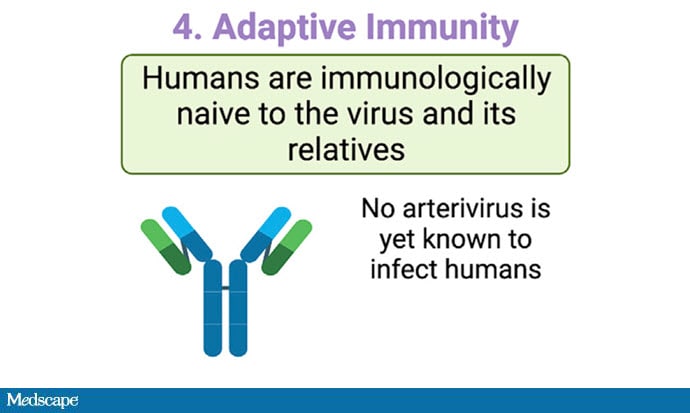 Have we seen this virus before, and thus, do we have some memory T and B cells there that are ready to leap into action should we become infected again? There’s no real evidence of adaptive immunity in humans because this virus has never been shown to have entered humans at all. There’s clearly a parallel here with SARS-CoV-2 in that basically no one had any adaptive immunity when SARS-CoV-2 emerged because it was novel.

The bottom line here is, no — we’re not going to worry too much about SHFV. But these classes of arteriviruses, which live in all Old World monkeys, are very close to being able to leap from monkey to human. As humans encroach deeper into their environment, they’re going to come into contact more and more with these animal reservoirs of certain viruses. 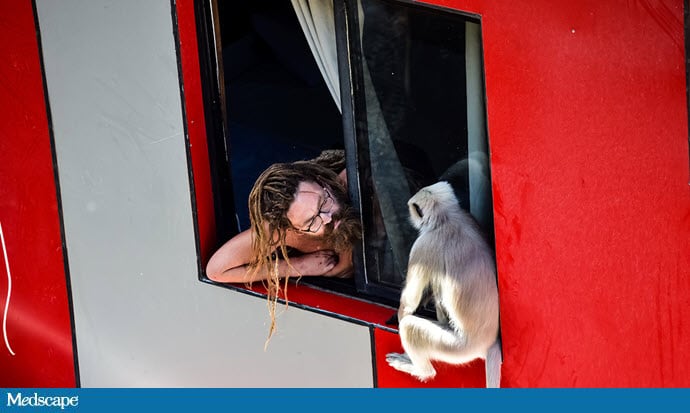 We know what aspects we need to be on the lookout for, for viruses that may be able to make the jump. And the authors argue that we should be surveilling the human population, developing serology tests to see if that jump has been made, so we can act quickly enough and stop the next pandemic before it starts.

F. Perry Wilson, MD, MSCE, is an associate professor of medicine and director of Yale’s Clinical and Translational Research Accelerator. His science communication work can be found in the Huffington Post, on NPR, and here on Medscape. He tweets @fperrywilson and hosts a repository of his communication work at www.methodsman.com.