In Medscape’s Physician Suicide Report 2022: The Tragedy of the Profession, about 1 in 10 of the more than 13,000 physicians surveyed admitted having suicidal thoughts or attempting suicide. Reader comments about the report show just how raw and visceral physicians’ responses to such statistics can be. 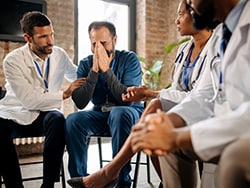 One commenter called the 9% of respondents who had pondered suicide “huge.” Readers felt a better and more nuanced understanding is needed of the reasons for doctors’ vulnerability to suicidal thoughts.

“I would like to get a detailed look at why, so that we can figure out recognition of someone in trouble and hopefully prevention,” another commenter said.

Physicians were asked whether healthcare organizations and medical schools bear some responsibility if a physician or student takes their own life. Youngest respondents (millennials, aged 27–41) answered yes to that question most often, but with each subsequent age group, fewer respondents took that view.

One commenter, a psychiatrist, noted that suicide typically doesn’t “just happen” such that responsibility can be assigned to one party. It is a “consequence of the complex interface between biology, psychology, and our social environment.”

While another reader concurred that “it is very important to focus on the person” when a physician faces crisis, preventing future incidents requires a “focus on institutions and systems” as well.

Pointing at the System

The report did not address potential contributing factors to physicians’ suicidal thoughts. But a number of commenters minced no words in pointing to the environment in which many employed physicians practice medicine. At the very least, commenters argued, these conditions raise the probability of physician burnout and depression.

“For the past two decades, the standard of care has become evidence-based” rather than patient-specific, one reader complained. “Herein lies the problem…. Big Pharma funds studies and Big Pharma expects certain results.” Shorter times for patient visits force many physicians into a “crisis of conscience.”

Other readers concurred. “Let’s talk about the real problems that lead to depression and suicide in medicine,” one wrote. “Hospitals and health centers are corporations that will destroy a physician’s career and livelihood.”

“One of the main contributors is when providers realize that the administration does not have your back,” added a nurse practitioner who discussed the dissatisfaction physicians she knows express about their practice environments. “All they want is ‘Metrics completed.’ “

A minority of respondents in Medscape’s survey (35% to 36%, depending on age) had taken their suicidal thoughts to a therapist. Why not? Some respondents expressed fear they would have to disclose treatment to a licensing or credentialing board and have the report hover over their entire careers.

That’s not a minor concern, one commenter said. “Although this danger has theoretically improved since the 2018 policy adopted by the Federation of State Medical Boards [recommending that licensing boards refrain from asking mental health treatment questions not permitted by the Americans with Disabilities Act], not all state boards follow this guidance.” One recent study found that North Carolina is the only state that consistently followed the FSMB policy.

Most states have safe harbor provisions for doctors seeking help from their physician health programs (PHPs), but one commenter argued they don’t go far enough and that PHPs “apparently do not understand their obligations under the ADA.”

Seeking Help in a Safe Setting

In Medscape’s report, baby boomers (aged 57–75) more frequently confided having suicidal thoughts with a therapist. Gen-xers (aged 42–56) more often went to a family member, millennials to a friend or colleague.

Regardless, commenters made clear they think it’s essential for physicians not to keep pain and problems to themselves ― but also not to seek help for suicidal thoughts from their own health systems.

One thing is clear: it is absolutely essential to reach out for help and not to keep the pain and problems to yourself.

One physician wrote, “Do not have candid psychological discussions with someone paid by someone with an adversarial interest.” Echoed another commenter: “The last person you should tell about suicidal thoughts is an administrator or one of their useful physicians.” Better to immediately confide in a trusted advisor or friend and set an appointment for professional help immediately afterward, that reader advised.

Helpful Resources If You Have Suicidal Thoughts

how many cultures need to be taken at revision shoulder arthroplasty?

How CPR Steps Succeeds and its Contraindications

The benefits of eating Jarlsberg daily

Mistakes and Successes in Building Wealth

How CPR Steps Succeeds and its Contraindications