More and more physicians are being wooed by private equity firms that want to buy their practices. The total value of private equity deals in healthcare in 2019 is estimated at about $120 billion, and it’s expected to grow over the coming years. 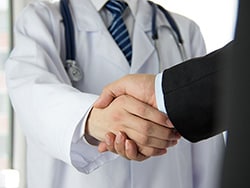 While the potential profit may seem alluring, physicians have mixed feelings as to whether this will be a boon or a disappointment.

For 19 years, Falcone was CEO of an emergency medicine group with 35 partners that staffed 10 emergency departments, mostly in Maryland. “We were a pretty small operation looking to get bigger, but to do that would require a substantial investment,” he said.

In 2015, after checking out all their options, the partners decided to sell to US Acute Care Solutions (USACS), a new private equity company founded by Welsh, Carson, Anderson & Stowe, an investment firm in New York City. Private equity can be used to expand practices and pay for new equipment. Falcone, serving as a USACS board member and its operational president, helped spur the company’s astounding growth. Today, USACS has about 5000 physicians and other clinicians operating in 30 states.

In 2019, Falcone stepped down from his management post at USACS, took training in integrative medicine, and 2 years later opened a solo integrative medicine practice in Rockville. The new practice, which operates on a concierge model, is not connected with USACS, but Falcone still sits on the USACS board.

“I had a great experience at USACS. I believe in the power of private equity to support our patients and physicians,” Falcone said. “Now, at age 58, I have a second career in integrative medicine.”

David Fleeger, MD, has a different opinion of private equity. “I get offers from private equity firms fairly often, but I’m not seriously interested,” said Fleeger, a surgeon with Central Texas Colon and Rectal Surgeons in Austin.

“We don’t want to sell to anybody; we want to control our destiny,” he said. “We don’t have to borrow money or repay loans, and we don’t expect to get a windfall for the practice. The profits in medicine are too narrow for that to be realistic. There is no free lunch.”

Some of the doctors who sign up for private equity deals become dissatisfied and want to end the arrangement, according to John Pinto, an ophthalmic practice management consultant in San Diego.

“I get calls about once a month from doctors who want to get out of a private equity deal or revise the terms,” he said. “Some complaints are that the PE firm was too tight with the budget, wouldn’t hire needed staff, mismanaged operations, or otherwise mishandled their investment in the practice.”

It’s difficult for disgruntled physicians to exit a private equity deal, Pinto said. They commonly have to give up part of the payment they had received for their practice if they leave prematurely, and depending on the jurisdiction, stiff noncompete clauses in their contract won’t allow them to practice nearby.

Disillusioned physicians ― and even many physicians who had good experiences with private equity ― usually don’t want to air their complaints in public. One reason most of these doctors keep silent is that they have signed nondisclosure and nondisparagement agreements that are part of most private equity deals.

Private equity firms typically pay a great deal more for practices than hospitals or even many large private practices, according to James D. Wall, anattorney in Winston-Salem, North Carolina, who has handled many private equity deals. Wall said private equity often organizes physicians around one specialty. One advantage these physicians have over hospital-employed physicians is that they aren’t under pressure to refer within a network.

Private equity companies set values for practices on the basis of their earnings before interest, taxes, depreciation, and amortization (EBITDA), said Howard Bogard, an attorney with Burr & Forman in Raleigh, North Carolina, who has handled many deals. Bogard said the amount physicians are paid is usually between 4 and 12 times’ EBITDA, so if your practice is earning $1 million a year in EBITDA, you would get $4 million to $12 million for it.

Of the total price tag, “Doctors get a hefty immediate payment when they sell,” Bogard said. “It might be 70% of the purchase price up front, and the 30% left over is equity in the buyer. The private equity firm then sells the practice 5 to 7 years later, and at that time, the physician’s equity is converted to cash and equity in the new buyer, often at the same 70/30 ratio. The idea is to keep the doctor interested in staying.”

Private equity firms expand practices to receive more favorable reimbursements and achieve economies of scale, according to Jane Zhu, MD, an assistant professor of medicine at Oregon Health and Sciences University, who has studied the phenomenon. Zhu said these firms may enhance profits by contracting with Medicare Advantage plans, joining accountable care organizations (ACOs), having their physicians work longer hours, and using advanced-practice clinicians instead of physicians.

“They want to make a large return in the order of 20% per year over several years, but they don’t want to strip the practice of value, because they’ll need to sell it to a new investor,” Zhu said.

When doctors sell to a private equity firm, they become employees and often have to take a pay cut, but their pay may rise again as new efficiencies are instituted. This occurred for partners in Minnesota Eye Consultants (MEC), an 11-member ophthalmology practice in Bloomington, Minnesota, that helped found Unifeye Vision Partners (UVP), a private equity company financed by Chicago-based Waud Capital Partners.

“When we sold the practice in 2017, we expected to see a 30% cut in the partners’ personal income,” said Richard L. Lindstrom, MD, who headed MEC until he retired last year. “Now, coming into the sixth year, all of the former partners who are still working are earning 10% above pre-sale levels, except for one doctor who wanted to work fewer hours.” These doctors aren’t working longer hours but rather are benefiting from efficiencies, such as adding scribes and improving scheduling, he said.

Private equity brought discipline to the practice, said Lindstrom, who still sits on the Unifeye board. “In an independent practice, the partners may decide on a new piece of equipment because it would be fun to have, not because they’ve done a financial analysis,” he said. “We don’t wing it anymore.”

On the other hand, according to Zhu, some private equity firms may use draconian methods to improve efficiency. “Doctors may be expected to order or perform more services or work faster or longer to reach a certain threshold,” she said.

Can Private Equity Uphold Your Interests?

To win over doctors, a private equity firm may agree to finance projects that the doctors want. For example, Lindstrom said after his group joined Unifeye, Waud agreed to finance the doctors’ plan to open a new $6 million office. Before the deal, the partners would have had to take out a $6 million loan and personally guarantee it, he said.

A private equity firm may even agree to support the selling doctors’ practice philosophy, such as serving low-income patients ― as long as it has a revenue stream. Luis Benavides, MD, is part of a seven-physician family medicine practice that treats many low-income patients in Laredo, Texas. “There is a lot of poverty here,” he said. This March, the group sold to a large private equity company, whose name Benavides preferred not to reveal.

One reason they made the new arrangement, Benavides said, was to qualify for ACO REACH, a new Medicare payment program that is mostly used in underserved areas and that allows more distribution of shared savings payments. “Our goal has always been better care,” he said. “We want to know how we can best serve our community.”

Benavides acknowledges that he has less independence in the new arrangement, but “I already lost my independence when I went from solo practice to a group,” he said. “The upside of a larger organization is that other people may have better ideas than you have.”

Private equity firms often set up governance structures to give physicians some measure of control. Lindstrom said the governing board of his former practice is solely made up of physicians and deals with local issues such as what office doctors will work in and how many patients they will see. Waud Capital has control of the Unifeye board of directors, but it mainly deals with larger issues, such as acquisition of more practices, he said.

In rare instances, private equity gives doctors control. Falcone said that from the start of USACS, doctors owned 65% of the company, and in 2020, the physician partners bought out Welsh Carson. “Then we engaged the private equity firm Apollo Global Management, which lent us money for the buyout and became our capital partner, with the doctors now owning 98% of the company,” he said.

On the other hand, some private equity arrangements reportedly have little regard for doctors’ well-being, especially if they are new doctors who didn’t participate in the deal and don’t have equity in it. Zhu recalled that a new physician was recruited by a practice and was promised a partnership track, but she wasn’t told that the partners were negotiating a private equity deal. “She didn’t find out until the practice was sold months later,” Zhu said. “The chances of her getting any equity now are unclear.”

Making sure that you pick a company that has your interests at heart requires a lot of digging. Lindstrom said he and his partners took 3 years to make a decision. They hired a broker to pick the 10 best private equity firms. Then they met with those companies and hired a law firm and an accounting firm to assess them. As the partners inched toward a deal, they voted on each of five critical steps in the decision-making process, he said. He noted that each vote was unanimous.

“Private equity deals are changing the healthcare landscape,” Wall said. “They are creating large, independent practices that help physicians remain independent from hospital systems and potentially have the clout to get more favorable reimbursements.”

“There is a lot of misunderstanding and mistrust among physicians about private equity,” Benavidas said. “I imagine it will take a while for it to be accepted.”

Until the COVID pandemic, the annual number of private equity deals for doctors had been rising. Will it recover that pace? Pinto said rising interest rates may dampen activity in the near future.