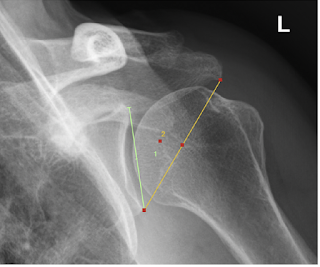 A CSA >35 degrees has been associated with rotator cuff tears while a CSA <30 degrees has been is associated with primary glenohumeral arthritis. It has been suggested that a larger (more obtuse) CSA increases the elevating vector of the deltoid, leading to fatigue of the posterior-superior rotator cuff while smaller (more acute) CSA angles lead to increased compressive forces across the glenohumeral joint leading to wear of the glenoid joint surface.

A few issues come to the fore:

1. Does it seem reasonable that a change in the CSA by as little as 5 degrees would change the pathology of a shoulder from cuff disease to arthritis?

2. Is the CSA influenced primarily by glenoid inclination or by the position of the acromion?

3. What does CSA tell us about the acromion? The author of A prospective observational case control study investigating the coronal plane scapular morphological differences in full-thickness posterosuperior cuff tears and primary glenohumeral osteoarthritis, points out that the position of most inferolateral point on the acromion is affected both by the length and the height of the acromion: a longer acromion will increase the CSA 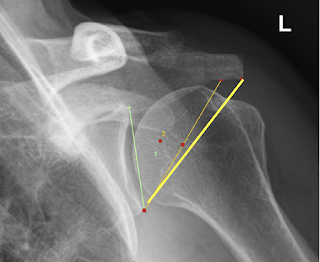 and a higher acromiom will decrease it. 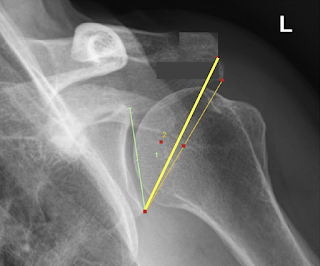 This article did not report glenoid inclination, so it is not known if the observed difference in CSA between revised and unrevised shoulder is related to glenoid inclination or to acromial anatomy; it would be of interest to know whether shoulders revised for glenoid loosening and cuff failure had more superiorly inclined glenoids. Shoulders with increased CSA have been reported to have a higher prevalence of rotator cuff tears; the preoperative status of the rotator cuff is not presented for the patients in this series. The authors of The implications of the glenoid angles and rotator cuff status in patients with osteoarthritis undergoing shoulder arthroplasty found that in osteoarthritic patients, the CSA was higher in those with secondary osteoarthritis with torn rotator cuffs than in those with intact rotator cuffs and that the CSA was positively correlated with glenoid inclination.

The effectiveness of decreasing CSA by increasing the inferior tilt of the anatomic glenoid is not known.

5. Is there evidence that “correcting” a high CSA by lateral acromioplasty improves the outcome of rotator cuff surgery? 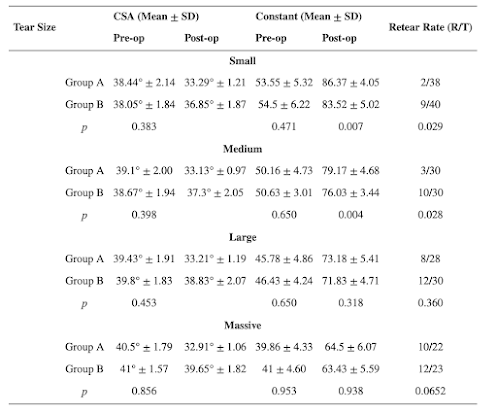 “The critical shoulder angle and its correlation with rotator cuff tears and alternatively glenohumeral osteoarthritis has become a popular research topic in recent years. With carefully standardized x-rays, a correlation emerges. This development has generated interest in potential clinical usefulness for this measurement, as well as possible surgical interventions to modify the course of these shoulder problems. Lateral acromioplasty may have a role in rotator cuff surgery, but early study results are mixed. Prophylactic lateral acromioplasty has been proposed but would not be evidence based at this time, and there could be unintended negative consequences. For now, accurate x-ray films and awareness of the critical shoulder angle by the clinician could impact the index of suspicion and also may prove useful in patient counseling for these 2 shoulder diseases.”

“The critical shoulder angle (CSA) has been associated with the development of rotator cuff pathology. More recent studies have also identified a correlation between an increased CSA and recurrent tears after arthroscopic rotator cuff repair. Although this observation is significant, several studies have failed to identify a correlation between CSA and clinical outcomes after rotator cuff repair. As a result, the usefulness of this measurement, and the need to address it with lateral acromioplasty, remains ill defined. Further research is required to demonstrate an association between CSA and clinical outcomes before treatment algorithms should be altered.”

Eggplant Parmesan – Once Upon a Chef