Samyukta Mullangi, MD, an oncology fellow at Memorial Sloan Kettering Cancer Center, says she supports the value-based care movement but is still waiting to see it work in her specialty. Value-based care is a healthcare delivery system where physician and clinician payments are tied to the quality of care provided, and clinicians are rewarded for efficiency and effectiveness. 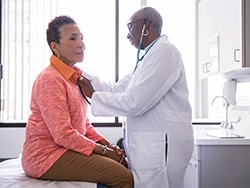 The biggest attempt — the Oncology Care Model launched by the Center for Medicare and Medicaid Innovation — ends this year after a disappointing 5-year run. An evaluation after the third year found that about 28% of practices dropped out along the way, and Medicare lost money on the experiment.

Many physicians working in various specialties say they support value-based care in theory but do not see that it is working in their practice.

“For most high-quality, hardworking doctors, the concept of value-based care makes sense,” said Sean C. Blackwell, MD, chair of the Department of Obstetrics, Gynecology and Reproductive Sciences at the University of Texas Health Science Center at Houston. “The problem is that the payers and the government may not be aligned with the same values doctors have about putting patient outcomes first.”

The federal government has been promoting value-based care for more than a decade by introducing new payment models that incentivize providers to improve the quality and reduce the costs of care. In 2015, the Department of Health & Human Services announced that half of Medicare reimbursement would be shifted to value-based payments within 3 years. A few days later, 20 major insurers and provider organizations pledged to put 75% of their business into value-based arrangements within 5 years.

Since then, the focus on value-based care has been relentless, but progress has been slow. Deloitte’s biannual survey of US physicians, conducted in early 2020, found that 97% of physicians were compensated via fee-for-service and/or salary, whereas 36% received value-based compensation. Meanwhile, the Innovation Center, a unit of the Centers for Medicare & Medicaid Services (CMS), reported in October 2021 that, of more than 50 value-based models it has launched, only six generated statistically significant savings for Medicare; only four worked well enough to be expanded.

Undaunted, CMS is adjusting its strategy with new ideas, and value-based care initiatives are ubiquitous among private payers. “It’s become downright fashionable for healthcare leaders to talk about their unwavering commitment to ‘value-based care,'” Sachin H. Jain, MD, president and CEO of SCAN Health Plan, wrote in a recent Forbes column. “Its virtuousness goes unchallenged. But should that be the case?”

In a postmortem of the Oncology Care Model published in JAMA Oncology, Mullangi pointed to two problems — inadequate data and factors outside a physician’s control — that contributed to its failure.

The model used administrative claims data to define episodes of care and calculate cost savings against historical benchmarks. But those claims don’t reveal a patient’s cancer diagnosis, let alone the details that determine the right treatment. Thus, an Oncology Care Model episode could have treatment costs that vary more than 100-fold despite having the same spending target.

Furthermore, the initiative expected physicians to reduce total cost of care, including drug costs, for a cancer episode. Physicians have no control over new high-cost drugs that emerge to become guideline-based standard-of-care agents, and attempts to increase payments to reflect the rising costs of new drugs failed to adequately adjust episode costs.

More broadly, Mullangi said the concept of value-based oncology care targets oncologists’ prescribing habits as a primary source of wasteful spending, which may not be appropriate. “But for the most part, oncologists refer to published guidelines to influence their prescribing efforts,” she said. “it becomes tricky to know what kind of levers we should use to influence that.”

Blackwell’s physician group participated in a bundled-payment pilot with a Medicaid HMO for low-risk maternity care that was somewhat successful. The payer saved money and Blackwell’s group earned incentive payments based on the group’s performance.

But the success was limited because hospitals — the biggest cost driver for births — were not included in the payment bundle, and the effort was discontinued when the pilot ended. To make it worthwhile in the long run, the insurer would have needed to negotiate bundled-payment contracts with all the physician groups — and all the hospitals — in its market area. “How do you do that in the complicated world we’re in?” he asked.

The Physician’s Time Requirement Is Too High

The largest value-based initiative is the Merit-Based Incentive Payment System (MIPS), launched by CMS in 2017, which rewards or penalizes physicians on the basis of the quality, cost, outcomes, and efficiency of patient treatment.

Like most physicians, neurologist Brad C. Klein, MD, and his colleagues at Abington Neurological Associates, a 10-physician private practice in suburban Philadelphia, have participated from the beginning. Doing so has not affected the way they practice, their patient outcomes, or their compensation, Klein said.

“We have always generated top scores on the MIPS program so arguably we’ve gotten whatever bonus was available,” he said. “But the cost associated with the physician’s time involved on top of the administrative management to support this has nullified that.”

Klein is enthusiastic about quality improvement efforts — his practice participates in the American Academy of Neurology’s registry, which benchmarks each neurologist’s performance to identify what needs to be improved — but participating in MIPS can be demoralizing.

“It diminishes your autonomy because you’re being told to put all this effort and time into a program that ultimately doesn’t change the quality of care for patients,” he said. “It takes away from the focus on our patients, and when you’re worried about keeping a practice alive, it is an added frustration.”

The administrative burden associated with value-based care is prompting a growing number of family medicine physicians to opt out of the insurance system altogether. Sterling N. Ransone Jr., MD, president of the American Academy of Family Physicians (AAFP), said between 4% and 6% of the academy’s members contract directly with individuals and employers outside any insurance system.

“Value-based care is a great idea, but the implementation of it has been less than optimal and, because of that, I think people are getting frustrated,” Ransone said.

The majority of AAFP members are employed; of those, about 60% are compensated on the basis of productivity alone, so relative value units (RVUs) are the measure that matters. That creates a disincentive to spend time improving, tracking, and reporting measures that support value-based care. “If you’re going to meet your RVU goals, you have to focus on productivity,” Ransone said.

“If I change my visits from 30 minutes to 60 minutes, I will offer much better care to my patients and see much better outcomes, but I will be heavily financially penalized for seeing fewer patients,” he said. “That’s a huge problem.”

The Many Challenges of Value Measurement

Another problem: how value is measured. Whereas some value-based measures for palliative and hospice care — for example, chemotherapy near the end of life — make sense to Sedhom, others do not. Enrollment in hospice — yes or no? — is one measure. Length of hospice stay, which is typically 3 days or less or 7 days or less, is another.

“For those of us who are at involved with patients and families, even a week of hospice is too short to really gain benefits,” Sedhom said. “Not everything that is measured matters, and not everything that matters can be measured.”

When value-based care models eventually come to maternity care, an ob/gyn’s cesarean section rate will be the most common measure of value because it is perceived to be something that physicians control, Blackwell said. “Most [C-sections] are driven by your population, not your practice patterns,” he said. “The doctors who take care of women that are higher risk, more underserved, and have multiple health conditions are naturally going to have higher C-section rates.”

Risk adjustment — how to case-adjust for women who are obese, have diabetes, and/or have high blood pressure, for example — has not yet been figured out. For one reason, it’s complicated, Blackwell said. For another, the billing data that health plans use don’t include the clinical information required for accurate risk adjustment.

Whereas some specialties have too few measures to support value-based care, primary care may have too many. The typical family-medicine practice contracts with seven to 10 payers, each of which has different quality measures that physicians are expected to track, Ransone said.

“If all of them would agree, ‘This is where we’re going to focus during this 1- or 2-year period,’ it would allow us to marshal our resources,” he said. “Because there’s no uniformity amongst the various payers, it’s really difficult to figure out how to thrive in a value-based care model.”

As value measures proliferate, some become contradictory. Average hospital length of stay — the shorter, the better — has long been a measure of value. Then came readmission rates — the lower, the better — as another. Most recently, the discharge-to-home rate — the higher, the better — has emerged as a value metric, and Richard S. Zimmerman, MD, inaugural medical director of Mayo Clinic Hospital in Phoenix and its former quality chair, is not a fan.

Expecting physicians to limit length of stay and prevent readmissions doesn’t always square with the best patient care. “So many patients need rehab or skilled nursing,” Zimmerman said. “Discharge to home may not be safe for them, but you get a ding if you send a patient to rehab or a skilled nursing facility.”

In Zimmerman’s view, focusing on the discharge rate denigrates the value of rehabilitation and skilled-nursing services that have long been considered parts of the continuum of care. “Discharge-to-home may be a value because it decreases the expense of care, but I think it reduces the quality and level of care that you can provide patients while they’re recovering,” Zimmerman said.

Value-based care asks physicians to be held accountable for quality and costs even though “the system is definitely not one that promotes value,” Sedhom says.

He points to the high cost of drugs that have been approved by the US Food and Drug Administration despite limited efficacy. “Whether a drug improves a patient’s quality of life or how efficacious it is has no bearing on its cost. Essentially, value is not correlated with cost at all,” he said. “If we’re trying to move to a value-based system, that’s something we should address.”

The term “value-based care” lets payers decide what constitutes value, Zimmerman, a neurosurgeon, said. “If treatment X only works for 10% of the cases, I might be in that 10%,” he said. “There’s no value in fighting with the insurance companies and having to pay my office staff to do that.”

Some Rural Hospitals Are in Such Bad Shape, Local Governments Are Practically Giving Them Away

The Power to Create Their Own Memories

‘American Diagnosis’: ‘We Need to Be at the Table’: Native-Led Medical Research Aims to...

I Tried Every Jar of Tahini I Could Find — These...

Some Rural Hospitals Are in Such Bad Shape, Local Governments Are...