Ralph Newman, MD, got a taste of how dangerous medicine could be at age 10, when he witnessed a physician being shot by a patient. 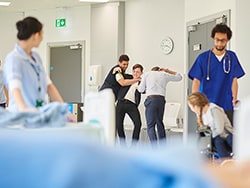 “I was visiting a friend whose father was a psychiatrist,” Newman recalled. “We were playing in the living room when the doorbell rang. My friend went to the door and opened it. Then I heard a shot. I ran to the front hall and saw my friend’s father slumped at the bottom of the stairs. He had come down the stairs to see who was there. It was a patient armed with a shotgun.”

As a result of the shooting, a large portion of the psychiatrist’s intestines was removed. In spite of this traumatic incident, Newman went on to become a psychiatrist ― who treated many violent prisoners. “I knew it was dangerous,” he said, “but I rationalized that I wouldn’t be attacked because I would be nicer.”

That attitude seemed to work until 2002, when a prisoner threw boiling oil on him. Newman was working at the Federal Medical Center Butner, a facility for prisoners in North Carolina. “A prisoner I had been treating was denied parole, based on my recommendation,” he said. “From then on, he was looking for a way to exact revenge.

“One day I was sitting in the nursing station, typing up notes,” Newman said. “Two new nurses, who were also there, had forgotten to lock the door, and the prisoner noticed that. He heated up some baby oil in a microwave, which was available to prisoners at the time. Then he walked into the office, threw the oil on my back, and came at me with a sharp pencil.”

Newman said the nurses fled to an adjoining office, locked the door, and wouldn’t let him in. He went into another office and collapsed in exhaustion. He was saved by an inmate who came on the scene, fended off the attacker, and called for help.

“I was taken to the burn unit,” Newman recalled. “I had second- and third-degree burns on 9% of my body. It was extremely painful. It took me 45 days to recover enough to get back to work.” The two nurses were fired.

It is rare that patients murder their doctors, but when it happens, the news tears through the whole medical community. When orthopedic surgeon Preston Phillips, MD, was killed by a patient in Tulsa, Oklahoma, on June 1, Jennifer M. Weiss, MD, recognized the potential danger to physicians.

Weiss said the impact of that event prompted her to take a patient’s abuse more seriously than she might have previously. “Before the killing, my colleagues and I might have swept the incident under the rug, but we reported it to the authorities,” she said.

“What happened was I told a parent of a school-aged child that the child wasn’t ready to go back to sports,” Weiss says. “This parent was incredibly triggered ― screaming and making verbal threats. The parent was standing between me and the door, so I couldn’t get out.”

Co-workers down the hall heard the yelling and helped Weiss get out of the room. “The parent was escorted out of the building, and the incident was reported to our risk management team,” she said.

Patients who shoot to kill are very different from agitated patients seen by many doctors on a regular basis ― particularly in emergency departments (EDs), psychiatric units, and pain clinics, said Scott Zeller, MD, a psychiatrist who is vice president of Acute Psychiatric Medicine at Vituity, a multistate physician partnership based in Emeryville, California.

“Agitated patients have trouble communicating their needs and can become physically and verbally aggressive,” Zeller said. He reports there are 1.7 million such incidents a year in this country, but most of the incidents of verbal aggression can be kept from exploding into physical violence.

Shooters, however, are very hard to stop because they usually plan the action in advance, Zeller said. He recalled the 2017 murder of Todd Graham, MD, a friend from medical school. Graham, an orthopedic surgeon in South Bend, Indiana, was gunned down by the husband of one of his patients after Graham declined to prescribe opioids for her.

Playing Down the Risk of Violence

Doctors may play down the risk of violence, even after they have experienced it personally. “Patients can get angry and may make threatening comments,” Weiss said. “A lot of doctors just brush it off.”

Simple remarks can set off violence-prone patients, as happened to James P. Phillips, MD, director of disaster and operational medicine at George Washington University in Washington, DC. He recalled asking a prisoner who was visiting his hospital to “lower the volume,” and the man exploded. “Even though he was handcuffed to the bed, he heaved an oxygen tank into a window,” Phillips said. “He said he would be coming back to kill me.”

Sometimes threats or other types of verbal abuse can be as destructive as physical violence. Diann Krywko, MD, an emergency physician at the Medical University of South Carolina (MUSC) Health in Charleston, South Carolina, has had some tough assignments. She worked in EDs in Detroit and Flint, Michigan, for a decade before coming to MUSC, where she serves as director of wellness, health, and resilience. One of the incidents that has bothered her the most involved a threat.

It happened when Krywko denied a patient’s request for narcotics. “She was very angry and said she’d come to my home and cut my children’s heads off,” Krywko said. “To this day, what she said horrifies me. I still see her smile as she said that.”

Krywko considered filing for a restraining order against the patient but didn’t because the patient could have learned her address. Phillips said fear of retaliation is one reason many doctors don’t report threats from patients. “The patient you report knows where you work and may come there to take revenge,” he said. “Also, you may have to continue caring for the person who punched you.”

Perfect Jasmine Rice – Once Upon a Chef

Online threats also may cause a great deal of angst. Phillips said he received many online threats when was a medical analyst for CNN in 2020. “Someone sent my address to his Twitter followers, and they shared it with others, so now the whole world knows where I live,” he said. “I had to upgrade security at my home.”

How to Deal With Volatile Patients

Being nice may not always work, but in many cases, it can keep a volatile situation from exploding, according to Krywko.

“When patients begin to show signs of agitation or are already there, we always try to verbally deescalate the situation, which involves listening,” Krywko said. “They want someone to hear them out.”

Doctors speak to patients from a position of authority, but Krywko advises that they should not be too blunt. “Don’t tell patients they’re wrong,” she said. “Even if they may be incorrect, they feel their viewpoint is valid. Encourage a dialog with words like, ‘Tell me more,’ ” Krywko said.

Doctors may have little warning of an impending attack because a patient’s mood can change quickly. This happened several years ago to Jennifer Casaletto, MD, an emergency physician in Charlotte, North Carolina.

“A man was brought into my ED by ambulance,” she said. “He seemed very calm for a long while, but then he became completely unhinged. A male nurse placed himself between the patient and others and was attacked. He got hurt but was able to continue working.”

Zeller said healthcare teams sometimes overreact when patients lash out. “The old-fashioned way to deal with an agitated patient is to call in the cavalry ― everyone does a group takedown,” he said. “The patient is put in restraints and heavily sedated. This is not good for anybody. Not only is it likely to injure and traumatize the patient, it can also injure the care team.”

Many hospital EDs have security guards. “I feel safer when a hospital has armed security guards, but they need to be well trained,” Casaletto said. “Many small hospitals and freestanding EDs do not have security officers at all, or the guards are undertrained or told not to touch anybody.”

In many electronic health record systems, doctors can flag violent patients so future caregivers can be forewarned. However, Zeller advises against writing about patients’ violence or rudeness in the medical record, because patients can have access to it and might take revenge.

“It feels like it has become much more dangerous to work in the ED,” said Hasan Gokal, MD, an emergency physician working in EDs at the Texas Medical Center. “Just last week, a woman pulled out a gun and fired it in an ED near Houston.”

The statistics back up Gokal’s assessment. Injuries caused by violent attacks against medical professionals grew by 67% from 2011 to 2018, according to the US Bureau of Labor Statistics. Those levels rose even more during the COVID-19 pandemic ― the assault rate in hospitals rose 23% just in 2020.

Why is the violence getting worse? “There are no boundaries now,” Torres said. “People are more likely to take offense and be threatening. Then there is the pandemic, with all the isolation. When you’re alone, things just fester.”

Krywko said she had “a patient who said she wanted to hurt the next person who irritated her, and that happened to me. She jumped out of her bed swinging and punching, and I wasn’t ready for it. I yelled for help and the care team came.”

“The rise in violence has to do with a decline in respect for authority,” Phillips said. “Some people now believe doctors are lying to them about the need for COVID precautions because they are taking money from the vaccine companies. The pandemic has exacerbated violence in every way.”

Phillips said that a growing lack of resources had led to more anger among patients. “There are fewer nurses and reduced physician coverage,” he said. “That means longer wait times for patients, which increases patients’ frustrations.”

Weiss said patients have higher expectations. “In sports medicine, the expectations are incredible,” she said. “Parents want their kids to get back to playing as soon as possible.

“Hospitals in particular are soft targets for violence,” Phillips said. “People know you can’t assault a flight attendant, because it’s a federal offense, but there is no such federal offense for violence against healthcare personnel.”