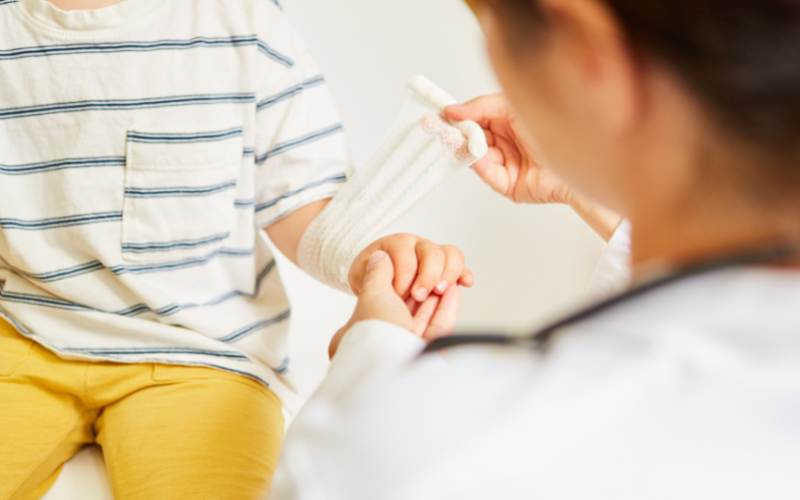 New research from the University of Oxford has shown that doctors can simplify treatment for the most common fracture in children, reducing NHS costs.

Torus fractures (also called buckle fractures) of the wrist are the most common type of broken bone in children affecting about 60K alone a year in the UK. It is the mildest form of broken bone in which the distal radius bone crushes (or buckles), instead of breaking.

National and international guidelines and practice for treatment varies. Doctors prescribe either the use of a plaster cast or hard splint to immobilise the wrist, or offer a bandage, but no ‘standard’ treatment has been agreed.

Daniel Perry, Associate Professor, Orthopaedics and Trauma Surgery at NDORMS, University of Oxford explained: “It is a common belief amongst both families and clinicians that a fracture needs plaster cast immobilisation to ensure adequate healing. However, evidence suggested that a bandage or no treatment was just as effective. We started the FORCE trial because it was not clear how much difference each treatment made to a patient’s recovery.”

The study, published in The Lancet, recruited 965 children aged 4-15 years with a radiologically confirmed torus fracture of the distal radius. They were randomised equally to receive either a bandage and no planned follow up, or a rigid splint and the usual outpatient follow up.

Patients recorded their level of pain, recovery using the arm, quality of life, complications encountered, and school absences for a period of 6 weeks after the treatment.

The study found equivalence in the two outcomes. A bandage with no planned follow up is equally as good as restricting movement with a hard splint and outpatient follow up.

Daniel said: “FORCE highlights the over-treatment that happens in many parts of practice. As doctors, we’ve always been taught to splint all broken bones – though in reality we know that many children with this injury present to hospital after several days as their parents considered it a wrist sprain, and indeed many almost certainly never come! As clinicians, we need to shift our mindset to consider buckle fractures as a wrist sprain and treat it with love and reassurance. With more research, perhaps we can move to a situation where we don’t even x-ray many wrist injuries in children.”

Watch our video and see more at the FORCE study website.