Next-generation DNA sequencing (NGS) detects bacteria-specific DNA corresponding to the 16S ribosomal RNA gene and can identify bacterial DNA presence with greater accuracy than traditional culture methods. These authors point out that clinical relevance of these findings is unknown. They sought to compare the results from bacterial culture and NGS in order to characterize the potential use of NGS in orthopaedic trauma patients.

Bacterial cultures were positive in 9 of 111 surgical sites (110 patients), whereas NGS was positive in 27 of 111 surgical sites (110 patients). Significantly more cases were positive on NGS as compared with culture (24% vs. 8.1%; p = 0.001), primarily in the acute closed fracture group (in which there was no reason to expect infection). No difference was found in terms of the percent positivity of NGS when comparing the acute closed fracture, implant removal, and nonunion groups. With respect to bacterial identification, culture and NGS agreed in 73% of cases indicating only slight agreement compared with expected chance agreement of 50%.

The authors concluded that NGS identified bacterial presence more frequently than culture, but with only slight agreement between culture and NGS. Their data suggest that NGS should not currently substitute for or complement conventional culture in orthopaedic trauma cases with low suspicion of infection.

Here are some other articles on the topic of NGS:

These authors  point out that the utility of next-generation sequencing (NGS) in differentiating between active infection and contaminant or baseline flora remains unclear. They conducted a study of primary shoulder arthroplasty patients with no history of infection or antibiotic use within 60 days of surgery was enrolled. All patients received standard perioperative antibiotics. After skin incision, a sample of the medial skin edge was excised. A synovial tissue biopsy was taken from the rotator interval after subscapularis takedown. Each sample set was halved and sent for NGS and standard cultures.

The 3 most common bacteria identified by NGS of the deep tissue samples (all species 10% of bacterial burden) were E coli (16%, 4 individuals), C acnes (12%, 3 individuals), and S epidermidis (8%, 2 individuals). The following species were each detected at the 10% bacterial load threshold for 1 patient: Staphylococcus aureus, Neisseria shayeganii, Streptococcus equinus, Catenabacterium mitsuokai, and Megamonas funiformis.

Speaker recommends opioid-free, multimodal protocol after elective foot, ankle surgery
Comment: This study did not actually examine the utility of NGS for the diagnosis of infection; instead it looked at shoulders having primary arthroplasty.

The article did not directly compare the bacterial species identified by (a) culture and (b) NGS for each patient.

Finally, as in the case of the article discussed below, it would have been helpful if the authors had run negative controls for NGS to make sure that the unexpected bacterial DNA found by NGS (e.g. E Coli, Bacilli, Porphyromonas, Ureplasma, Arthrobacter, Neisseria, Megamonas) were not the result of DNA contamination unrelated to the presence of viable organisms.

The total genomic DNA was isolated from tissue samples. These were then amplified for pyrosequencing. Amplification products were visualized, pooled, and subjected to size selection. Size-selected pools were then quantified and hybridized to generate single-stranded DNA. Single-stranded DNA was diluted and analyzed by emulsion-based polymerase chain reaction. The resulting amplification products were subsequently enriched and sequenced. Trimmed sequences were then run through USEARCH to cluster the sequences and mapped using the USEARCH UPARSE operational taxonomic unit (OTU) selection algorithm. Mapped sequences were then grouped by OTU; quality scoring-based sequence correction was then performed. Corrected sequences were then run through the Research and Testing Laboratory Genomics taxonomic analysis pipeline to determine the taxonomic classifications and abundance for each sample. Selected OTUs were then aligned using MUSCLE and a phylogenetic tree generated using FastTree. The selected OTU sequences were then globally aligned using USEARCH against a database of classified 16S sequences. Confidence values were assigned to each OTU classification, and the lowest common ancestor was determined based on these confidence values. The top hit and lowest common ancestor was then reported for each OTU.

Cutibacterium (formerly Propionibacterium) acnes was the most common bacterial species cultured (8 of 13 [61.5%]) and identified by NGS (12 of 17 [70.1%]) in cases of definite and probable infection. The concordance (κ) between the 2 diagnostic criteria for defining infection that included culture or NGS was 0.333 (fair). Data from the 44 cases is shown below. 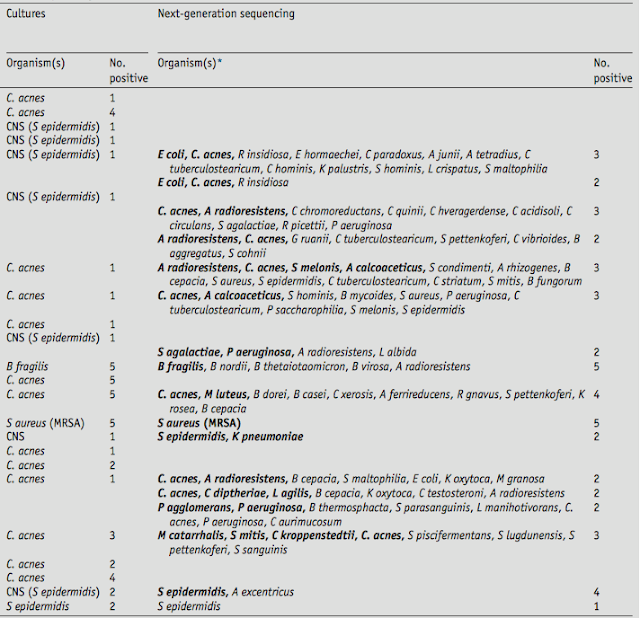 Back to School & Adoption: 4 Resources