Getting an ultrasound could soon become as easy as putting on a Band-Aid®, thanks to recent innovations by a team at the Massachusetts Institute of Technology (MIT). 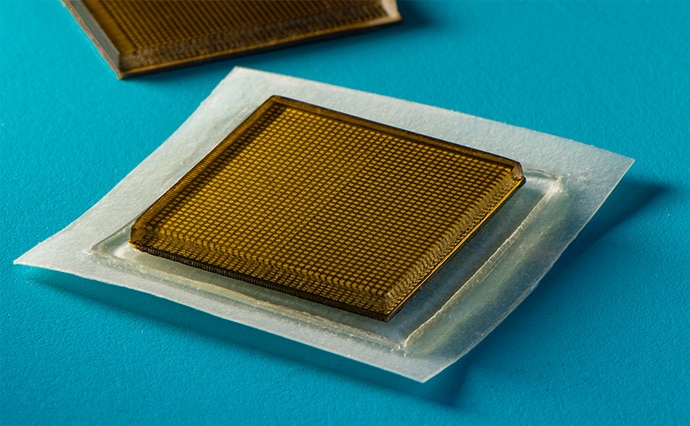 Researchers have developed a new bioadhesive ultrasound device, or “ultrasound sticker,” that can provide 48 hours’ worth of ultrasound images of organs, muscles, and tissues. Eventually the sticker may be used at home, providing benefit for anyone, but being particularly valuable for care of pregnant women and athletes.

Conventional ultrasound technology is only available in hospitals and requires large, bulky equipment that provides images from one brief session. Now the same technology could be available as a small, wearable patch.

“It’ll be a game changer in the field of medical imaging, especially ultrasound imaging, and the field of wearable devices,” says Xuanhe Zhao, PhD, part of the team at MIT and senior author of the recent Science paper.

To image with traditional ultrasound, a gel is first applied to the skin to help transmit ultrasound waves. These waves are produced by a stick-like probe that is pressed into the desired area. The waves bounce off the body’s internal organs and are echoed back and picked up by the probe, creating an image.

Instead of gel and a stick, Zhao and his team invented a thin patch probe that pairs with a Jell-O-like “couplant” that facilitates the transfer of ultrasonic waves. The sticker is 2 centimeters square, and 2-3 millimeters thick — about the size and thickness of a nickel. The patch allows for imaging both close to the surface and up to 20 centimeters deep.

The sticker was tested on 15 subjects in different body areas — including the arm, neck, and chest — which highlighted just some of its potential benefits. Participants were monitored over the course of 48 hours and engaged in everyday activities like walking, jogging, and bicycling.

When applied to the arm, for example, the ultrasound sticker was able to continuously image the biceps over a 48-hour period. It was sensitive enough for Zhao to monitor the microdamage in these muscles during and after a 1-hour weightlifting session. “In the future, potentially coupling it with some image processing algorithm, the ultrasound sticker will warn you when the exercise is sufficient,” says Zhao, which could prevent injuries or help guide rehab.

When placed on the neck, the sticker was able to monitor blood pressure (BP). BP measured with a cuff is difficult to make wearable, reliable, and long term, says Zhao. This device could continuously monitor the diameter of the carotid artery and warn patients and physicians of elevated blood pressure.

When placed on the chest, the sticker imaged the heart, offering potential new management options for those with heart problems. According to Zhao, the ultrasound can be applied directly on the chest and send images or video to clinicians.

Another feature — not tested in the study, says Zhao, but having potential — is the ability to monitor fetuses. Generally women have two to three ultrasounds during pregnancy. The ultrasound sticker could allow a mother and her physician to see her fetus as often as needed to ensure good health.

Currently, the sticker is connected to a data box via wires. Zhao and his team are working to create a second-generation sticker that is wireless and able to connect to the user’s smartphone. He estimates 2-5 years for the integrated system to be made wireless and receive Food and Drug Administration approval for medical use in the United States.

These are the first steps in what he hopes will be a major move forward in wearable tech, with the eventual goal of “better health for the whole world,” he says.

Leaving His Mark on His City