Few people like to pay taxes, and physicians are no exception.

For the Medscape Physicians and Taxes Report 2022, physicians shared information about their tax debt as well as how they feel about the US tax code, audits, and the prospects for the future. 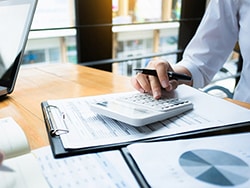 Even though it may not always seem that way to physicians, their family tax bills — around $75,406 on average — are in line with the other top 10% of US taxpayers, according to an examination of IRS data by the Tax Foundation. However, when it comes to local taxes, the Tax Foundation found that physicians pay more than average. (Forty-three states collect tax on individual incomes.)

According to Alexis Gallati, founder of Cerebral Tax Advisors, a Knoxville, Tennessee–based firm that caters to medical professionals, doctors also should pay attention to their effective tax rate, or the percentage of income they pay in taxes. It takes into account differing tax rates on ordinary income, capital gains, and other income sources, she says. “It gives a better 30,000-foot view of your tax situation.”

Some high-income families are required to pay the Alternative Minimum Tax (AMT), though in 2019 that applied to only one tenth of US households. The AMT is designed to make sure that high earners with many options for exemptions and deductions still contribute a minimum amount of tax. Only 13% of physicians surveyed said they paid the AMT, though 29% were unsure.

Filing Taxes as Painful as Paying Them

When asked what they would do to fix the tax system, the physicians in the Medscape survey had a wide array of proposed solutions, from “Drop the corporate tax rate to nearly nothing to stimulate the economy” to “Everyone should pay equitably. There are too many loopholes for the very wealthy.”

Some of the complaints were less about tax rates than the process of filing. One respondent said, “I would love for this system to not be our personal responsibility. Why should it be my duty to pay someone every year to do my taxes?”

Forty-eight percent of physicians prepare their own taxes (about the same percentage as the rest of the population), with most of those filing electronically, primarily because it saves time and the software is easy to use. Intuit TurboTax was the most popular online software, with 22% of respondents saying they currently used this product.

Of those who did pay someone to prepare their taxes, the complexity of their taxes cost them; the average respondent paid about three times the average rate for the service. Though in the long run, the cost might have been recouped.

They Went Back. | Vasya and Anna’s Story

Navjeet Chahal, managing partner and CEO of Chahal and Associates, a San Francisco, California–area firm specializing in working with physicians, points out that tax advisors don’t just fill out the forms; they proactively advise physicians about how they can limit their taxes. And indeed, most respondents feel that they got their money’s worth, with 70% saying their tax preparers charged a fair fee.

Though the physicians surveyed tended to think they pay too much tax, and several mentioned particular gripes with the system, the complexity of the tax code didn’t seem to be a big issue. While 82% of Americans polled last year by Pew Research said they were bothered “a lot” or “some” by the complexity of the tax system, 68% of physicians agreed or slightly agreed that the US tax system “makes sense.”

Physicians are the beneficiaries of several types of tax breaks. Contributing to a pre-tax 401(k) account was the most common exemption, with 60% of physicians surveyed using this plan. Other tax breaks cited by respondents were: contributing to charity (54%), home mortgage interest (46%), and writing off business expenses (39%).

About 1 in 5 physicians has experienced an audit, but that risk has declined significantly in recent years, thanks to tighter IRS budgets. Overall, only about 1 in 167 US taxpayers were audited in 2020, according to the IRS. Even for taxpayers reporting $5 million or more in income, the audit rate is only about 0.25%, the Government Accountability Office says.

The odds of a physician being summoned to a meeting with an auditor probably won’t increase for a few years, Gallati predicts. But the good news for doctors is bad news for lower-income Americans. “The IRS is woefully understaffed and underfunded, with the result that the agency is going for lower-hanging fruit and auditing more people in lower income brackets,” she told Medscape Medical News.

When it comes to taxes, physician respondents, on the whole, did not seem to be optimistic about the future. Sixty-one percent expect an increase in their tax rate due to policies of the Biden administration. One respondent veered into hyperbole with the comment, “I believe taxes will increase for physicians until they have no more money!”

Chahal doesn’t see it that way. He points out that recent attempts to raise taxes completely failed. “I personally don’t see that happening unless there’s a significant shift in the House and the Senate,” he says.

Avery Hurt is a Birmingham, Alabama–based freelance writer who writes often about the science and practice of medicine.